Free Shipping from 60 € *Spain and Portugal 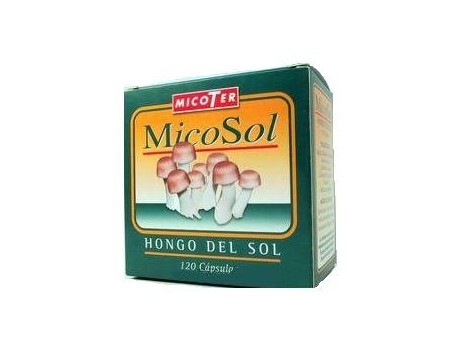 Micoter Micosol (Sun Mushroom Agaricus Blazei-Murril) 120 capsules. FEATURES OF THIS FUNGUS: Agaricus blazei (Himematsutake, Cogumelo do Sol, the sun or Mushroom Mushroom of God): It is an edible mushroom, native to the mountains of the Atlantic...
More info

Micoter Micosol (Sun Mushroom Agaricus Blazei-Murril) 120 capsules. FEATURES OF THIS FUNGUS: Agaricus blazei (Himematsutake, Cogumelo do Sol, the sun or Mushroom Mushroom of God): It is an edible mushroom, native to the mountains of the Atlantic Forest of São Paulo, Brazil. Powerful immune system stimulant promoting natural defense mechanisms to combat a variety of infectious agents because of their antitumor and antimutagenic properties and immunomodulatory activity. It is also recognized as a rich source of vitamins, minerals, enzymes, amino acids and polysaccharides that promote health and longevity. The longevity and low incidence of various diseases, including cancer, who enjoyed a high number of the population of Japanese immigrants living in a small mountainous region of the state of Sao Paulo, Brazil, called Piedade, attracted the attention of American epidemiologists. They correlated these statistics to the consumption of the fungus Agaricus blazei. Knowing this, a Japanese sent the fungus to study various academic institutions in the world, being then won the interest of Dr. Inosuke Iwade, Forestry Professor of Biochemistry and Applied Science, Faculty of Agriculture Mie University in Japan, who the "present" officially to the scientific community in 1965. In 1980 he performed the first scientific study to see if the fungus polysaccharides strengthened the immune system. The result was surprising: the Agaricus Blazei has more of polysaccharides beta-glucans than any other fungus known. Since then the Agaricus has focused the attention of dozens of scientific studies around the world that endorse their antitumor and antimutagenic capabilities as well as its immunomodulatory activity. The β-glucans present in this species are recommended as cancer therapy attached by the World Health Organization (WHO). Thus, their use is particularly suitable for problems of cancer. PROPERTIES: - Preventive effect against cancer: the fungus contains large amounts of indigestible fiber that absorbs cancerous materials present in our body and out with the faeces. - Diabetes (reduces blood sugar): acidic proteins present in the fungus have positive effects when it comes to reducing blood glucose. There are abundant references to striking improvements in cases of diabetes in Japan. - Reduces blood pressure, cholesterol and atherosclerosis: the aforementioned dietary fiber and unsaturated fatty acids-like linolin-contained in the fungus can reduce blood pressure, cholesterol and prevent arteriosclerosis. - Compensatory effect of other treatments: to enhance the immune response, restores values suppressed by chemotherapy and radiotherapy. Beta-glucans also containing this fungus are able to reduce postoperative infections. - Anti-cancer effect: the fungus contains natural steroids known for their anticancer effects (other than the chemically produced steroids that are often identified as a cause of disease). - Antitumor effect: beta-glucans enhance fungal activity of macrophages, antibodies that destroy and prevent the proliferation of cancer cells. The Agaricus Blazei Murill stimulates, among others, the T and B lymphocytes, production of interferon and interleukins. It was found that when someone eats the fungus increases a 3.000% blood NK cell production calls "killer cells of the immune system within 2-4 days. According to Dr. Takashi Mizuno: "Agaricus Blazei Murill has demonstrated antimutagenic activity, bactericidal and antoangiogénicas, and be a powerful stimulant to promote systemic immune system's natural defense mechanisms to combat a variety of infectious agents besides cancer." INGREDIENTS: Agaricus blazei (sun mushroom) mycelium, Gelatin (capsule), microcrystalline cellulose, Vitamin C, magnesium stearate. It contains 25 mg of beta-glucans per capsule. PRESENTATION: 120 capsules. Net weight: 54 g. INSTRUCTIONS: Take 4 capsules per day, in the main meals with a little water or juice. NOTICE: The information contained in this website is purely informative and can not be considered as a substitute for the prescription, diagnosis or treatment.

All our products are sent with full guarantees and security. Shipping to Barcelona / Catalonia 4 €, Rest of Spain and Portugal 6 €. Europe, America and the rest of the world since 14,00 €. See all our conditions conditions*

You have 14 days to return your order from the date of arrival at your home. We guarantee a refund of the amount paid for products returned of your order. Display all details of our return policy.